Donate To This Campaign

When you have a child, you’re in it for the long haul. And you’ll do everything you can to help your child live their best life. There are days when having ten hands wouldn’t be enough and it makes you thankful for the quiet times. When you have a teenage son with cerebral palsy who functions at the level of a three-year-old, quiet days are hard to come by. Our son Henry has a sister and a brother, parents who can care for him and a devoted grandfather whose support is constant, as well as a loving extended family that stretches as far as B.C., but this marathon is a full team effort with no finish line. You may not realize it but moving forward is a little easier because of donors like you who generously support the care that my family depends on. Let me tell you why.

Henry had bleeding in his brain about two weeks before birth. The cause is unknown and like many babies born with cerebral palsy there is no way of knowing how they will develop. We began in a Neonatal Intensive Care Unit (NICU) and today Henry’s medical file includes CHEO visits to neurology, urology, orthopedics, ophthalmology, development and rehabilitation – there are few departments at CHEO that we haven’t consulted. We have learned that donors have helped put the tools in the hands of the clinical teams that we rely on.

Cerebral palsy isn’t fatal, in many cases it doesn’t worsen with age, but our son Henry has had complications. He began having seizures at eight months old which evolved into Lennox-Gastaut syndrome, a form of epilepsy and at eight years old he experienced a sharp decline, and we were referred to palliative care at CHEO and Roger Neilson House.

Our family didn’t know what that meant at the time. We definitely do now. Palliative care is a term that makes people think of critical illness and death. While true in some cases, that is not the whole picture when you are talking about pediatric palliative care. Children born with life-limiting conditions can live their version of an active life for decades, or their condition can be progressive giving them less time, or they can suddenly become very sick – even the medical professionals don’t know what the future holds for each child. There is a spectrum, and for someone like Henry, it makes a rainbow showing that joy, connection and quality of life are possible.

The family-centered care at CHEO includes services delivered in partnership with Roger Neilson House that help families like ours meet day-to-day challenges. A big part of this is respite care which is supported by donors. Henry is now 16 years old. He’s non-verbal, has cortical visual impairment, he’s fed though a G-tube and because of epilepsy he follows a ketogenic diet that requires a lot of preparation. He’s up late at night like a teen and awake early full of energy like a toddler. He’ll pull out his feeding tube and scream when he’s frustrated but he’s social and wants to interact all the time. It’s a juggling act most days and a few hours of help makes all the difference for us.

Sending Henry to Roger Neilson House for respite care made us a bit nervous at first, but we quickly realized the qualified staff at CHEO and Roger Neilson House work together to ensure Henry has access to medical care and also lots of time for play and fun thanks to dedicated nurses, doctors, recreation therapists and social workers who support our family every step of the way. It makes such a huge difference for us to know that Henry is safe, cared for and enjoying himself – it gives us room to breathe. That is all thanks to donors who support CHEO and Roger Neilson House.

As unsettling as this pandemic has been, we have been lucky during these times to receive in-home care from a nursing student who keeps Henry engaged so we don’t have to be “on” every minute of the day. We also had visits from a CHEO employee who was redeployed to bring respite services safely into the community. This was incredibly helpful during the months that Henry’s school was shut down. Having three teenagers in the house at the same time was a challenge and the in-home care provided Henry and our family with the help we needed. We remain so grateful for this support that you made possible.

Henry is a young man with a big personality. He’s a joker with a great sense of humour who will draw you in. Henry is happy by nature and loves people - almost as much as bowling which, thanks to his Nintendo Wii that has an adapted remote, he can play on his own. He also uses technology to send jokes back and forth with his siblings. And like any teenager he loves music. If you turn on Bohemian Rhapsody you better be prepared to sing, including the piano parts - Henry insists.

Help from expert caregivers, community-funded services and a connection to other families has been our saving grace. When Henry is in good hands, we can breathe a little easier. Whether it’s a few hours, a full day or longer, it helps our family stay afloat. It helps us be at our best for Henry. We can’t control what’s coming, we live life in the moment and Henry taught us that. Thanks to respite care and the support of donors like you we can enjoy the everyday moments, and so can Henry. Thank you for your past support and please consider, if you can, supporting CHEO again so that families like ours can continue to count on these life-changing services. 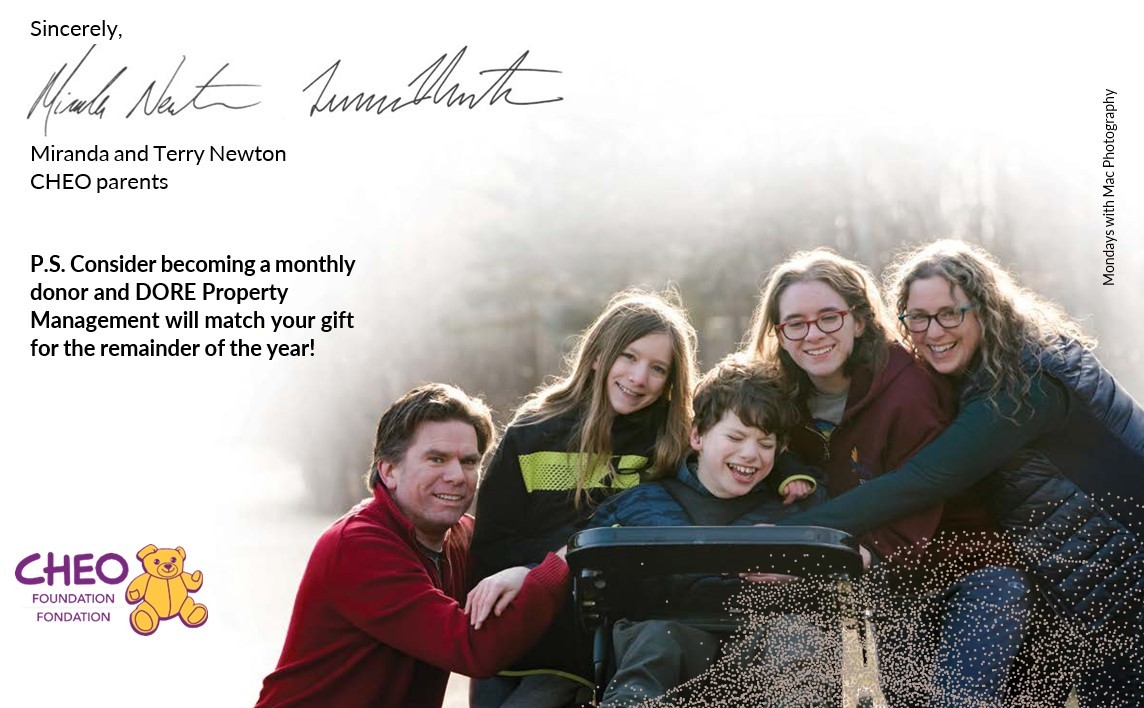