Donate To This Campaign

The doors at CHEO never close. Whether families are facing an emergency or a more complex situation that changes over time, it is CHEO’s mission to have the expertise and equipment necessary to provide answers, effective treatment and compassionate care. It simply could not be done without your support and let me tell you why.

We knew very little about CHEO until we needed to utilize its facilities, and we quickly realized how fortunate we were to have such a place in our community. When our daughter Isabella was three months old we noticed her eyes twitching one night as we carried her to bed; we thought this was just her falling asleep. But when we saw the same thing in the middle of a road trip, accompanied by violent shaking, we knew it was a seizure and we sought medical attention immediately. We were given a preliminary diagnosis of febrile seizures, a seizure brought on by fever. We learned this is not uncommon in small children and we hoped this would not occur again.

On New Year’s Day it did occur again, only this time the seizures were cyclical, coming one after the other. We ended up in the resuscitation room of CHEO’s Emergency Department, and then admitted to the hospital. The fear of the unknown was unbearable. What was causing these violent, heart wrenching seizures in our beautiful baby girl? To have a team like the one at CHEO brought us immense comfort. Thanks to neurologists and rounds of tests we found answers. Isabella was diagnosed with epilepsy. The team at CHEO very patiently walked with us as we learned more about epilepsy, how to treat it and how to live our best life. Just over two years later, with Isabella stable thanks to medication, we welcomed our son Owen. We watched him carefully, wondering if history would repeat itself. Thankfully, Owen showed no signs of epilepsy. Twenty months later our daughter Alexandra was born, now known as Alex, or most often, “Sassy Pants.”

At three months and twelve days old, exactly like her sister, Alex began to seize. Once again, we relied on the care team at CHEO. Neurology was called to consult in what would be confirmed as another case of epilepsy. But as soon as doctors realized they were treating the second instance of this condition in our family, our girls’ support team grew bigger and CHEO’s genetics team was asked to weigh in. There is no clear history of epilepsy in our families, but you can understand how in the eyes of the medical team, the girls’ cases were too similar to be a coincidence. Dr. David Dyment was one of the geneticists reviewing the case, as he said, “my Spidey sense was tingling.”

When our family was referred for genetic testing it put a team of specialists into motion. They began by taking our family history and looking for clues as to what the future may hold for our daughters. But CHEO needs the resources to unlock this information and it can only be done with the most cutting-edge testing. That’s where donors like you come in.

Advancements in technology has enabled genetic testing to evolve and change. In 2013, when Isabella and Alexandra needed genetic testing for the genes associated with epilepsy, there was no government funding available. My girls did not meet the criteria of medically complex or developmentally delayed patients who required urgent answers. They had a clinical treatment plan which was already helping Isabella. But CHEO’s genetics team wasn’t satisfied. There were still too many questions.

We feel very fortunate to have had access to genetic investigation. With your support you will help more children and families like ours find answers.

This now became a research case that not only revealed the gene responsible for the girls’ epilepsy, but also the subsequent diagnosis of other issues in Alex’s case. The collaboration was a success but Alex’s journey was not yet over.

As parents of a young child we were grateful that Alex was a tremendous sleeper. However, her excessive sleep became a concern when she began school and could not function at the same pace as the other children. Following yet another round of tests, she was diagnosed with narcolepsy, a disorder that causes severe sleepiness and uncontrollable episodes of falling asleep. With naps during the day, and a tailored treatment plan, Alex is now able to be in class with her friends and participate in sports.

We’ve benefited from the services at CHEO; from the ER to the OR, to the specialty clinics and in between, everywhere we’ve gone we’ve been met with caring, kind and incredibly knowledgeable staff ready to help children and their families. We now know that each area of CHEO relies on donor funding. Our experience at CHEO illustrates the importance of a clear diagnosis which translates into better treatment plans. Clinicians at CHEO need the technology and expertise to run the tests that help families find answers. This would not have been possible without people like you who support CHEO. As parents we want the best for our kids. Please help kids like Isabella and Alex benefit from this life-changing work.

P.S. Please consider becoming a monthly donor.  Your gift will help CHEO patients each and every day.
P.P.S. Thanks to Marriott International your donations will be matched up to $50,000 until December 31st. 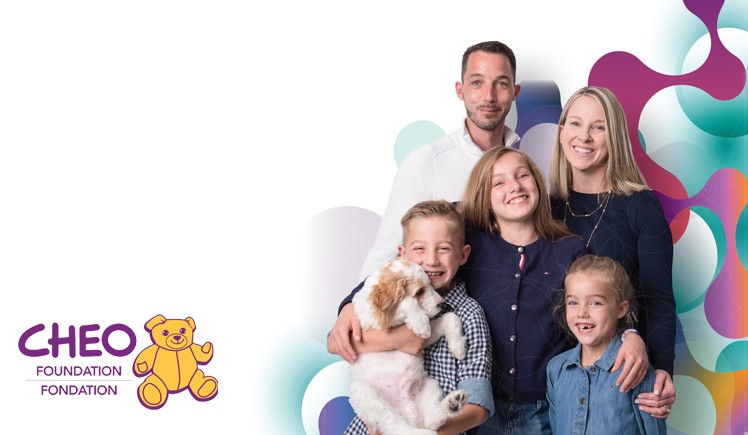